DevSecOps enables integration of security testing earlier in the software development lifecycle (SDLC). This is commonly referred to as “shifting security left” or “shift left.” DevSecOps enables seamless application security earlier in the software development lifecycle, rather than at the end when vulnerability findings requiring mitigation are more difficult and costly to implement.

DevSecOps is an extension of DevOps, and is sometimes referred to as Secure DevOps. While DevOps can mean different things to different people or organizations, it entails both cultural and technical changes. Ideally, security is an implied requirement of successful DevOps.

DevSecOps requires planning application and infrastructure security from the start. The right tools can help meet the goal of continuously integrated security, including such decisions as selecting an integrated development environment (IDE) with security features. The tools and process must also be able to automate some security gates to keep from slowing down the DevOps workflow. 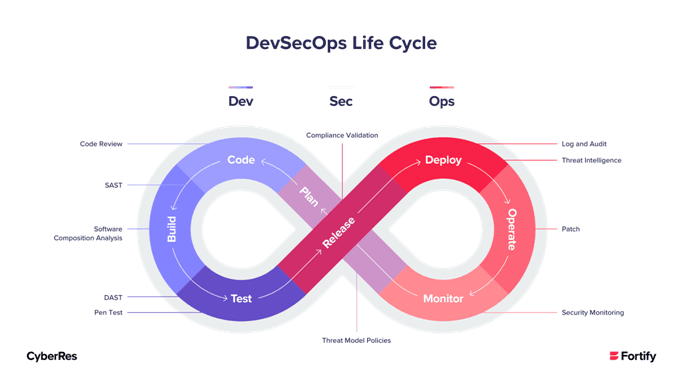 Developers don’t always code with security in mind. With a DevSecOps mentality, developers are enabled with enhanced automation throughout the software delivery pipeline to eliminate coding mistakes and ultimately reduce breaches.

Teams that implement DevSecOps tools and processes to integrate security into their DevOps framework will be able to release secure software faster. Developers can test code for security and detect security flaws as code is written. Automated scans can be initiated as part of code check-ins, builds, releases, or other components of the CI/CD pipeline. By integrating with tools developers are already using, dev teams can more easily improve the security aspect of web application development.

What are key components of DevSecOps

DevSecOps approaches may include these important components:

Making DevSecOps work for you