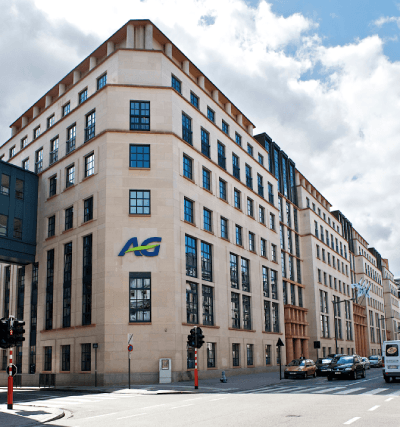 AG is Belgium’s largest insurance company providing a variety of life and damage insurance, as well as supplementary pensions. It has operated in the Belgian insurance market since 1824. Its three million clients consist of private individuals, SMEs, and large companies.

Following a series of mergers and acquisitions, in the early 2000s AG was in a close partnership with Fortis Bank (now BNP Paribas Fortis). It benefitted from in-house COBOL-developed systems and applications which gave AG a unique competitive edge in the marketplace. Wanting to be in control of its own future direction, AG started a project to create an autonomous IT application and infrastructure landscape. AG separated from Fortis in 2008. Philippe Van Belle, Chief Information & Technology Officer for AG, explains further: “Despite having started our autonomy IT project, we decided to keep some of our most business-critical core systems hosted on the BNP Paribas Fortis mainframe. The mainframe reliably processed 14 million transactions each day and, as a risk-averse insurer, we felt it would be best to continue to maintain them on the mainframe, a technology we had relied on since the 1960s.”

Fast forward some 10 years and the world is rapidly changing, along with customer expectations and markets. More digital connectivity is required, with integration of core systems to key business partners, as well as data and services integration. The mainframe is limited in terms of its openness to the digital world. As it happens, BNP Paribas Fortis planned its own major change with a datacenter relocation. This coincided with the end of the mainframe provider contract, and it now made sense for the two organizations to part ways. The AG team had a big decision to make: identify a new mainframe hosting partner and continue as before, given the criticality of the systems, or take the opportunity to replatform the entire system on to a Windows-based open environment, more aligned with the overall IT strategy and future vision of the organization. Attractive though this last option sounded, Van Belle had serious concerns: “Our financial regulators watched these developments very closely. We manage many billions of euros in assets and if anything were to go wrong and we experience serious downtime or performance issues, this will have a direct negative impact on the Belgian economy. With this in mind, we decided on a parallel track, where we focus on replatforming, but keep the alternative mainframe option open for as long as necessary.”

AG hired José Fortemps as its Head of Mainframe Replatforming to spearhead this important project. With 80 million lines of COBOL code consuming 6,000 MIPS, 60,000 daily batch operations, and valuable business intelligence embedded in the solution, the technology partnership to make the move happen was vitally important. An internal change management program was launched to support the replatforming and ensure all development and business teams were actively involved and invested in reaching the overall objectives. Fortemps picks up the story: “We evaluated several options to support our project and found that the Micro Focus Enterprise portfolio would serve our requirements best. Micro Focus has successfully migrated COBOL code into distributed, open environments for other large customers, and we felt confident that they would be the right partner for us. We had 100TB of IMS data that needed to be converted, so scalability and performance were key success factors for us. In a close alliance, our system integrator partner HPE, along with Micro Focus and Microsoft, reviewed our architecture with us and agreed on a target environment that would cover development, test, acceptance, and production.”

By the time the design had been agreed, the world was unfortunately in the grip of the COVID-19 pandemic. Throughout this time, Micro Focus Professional Services played a key instrumental role in the coordination with all partners and AG’s internal stakeholder teams so that even working remotely the project remained on track. Fortemps comments: “Initially, we imagined a linear process of design, build, test, and implementation. But of course, modernizing a decades-old IT environment was always going to be a complex journey. Still, thanks to the solution-focused attitude of everyone involved, and the constant management support we were slowly moving towards the finish line.”

During a long holiday weekend, three years of preparation culminated in a four day ‘big bang’-style cutover. The team prepared meticulously for this weekend, having spent the previous eight months producing a ‘run book’ with over 20,000 tasks outlined. Fortemps explains the process: “On the first day we closed all applications and started the data transfer from the mainframe to the new platform, deploying Micro Focus Enterprise Server. We then checked all data the next day and reconnected all applications. Two days of thorough screen and batch testing followed in which any last-minute issues were ironed out as we progressed, thanks to the total dedication of our internal IT and business teams, as well as our fantastic partners, including Micro Focus. The next day we launched all applications and opened our business without a hitch. The whole replatforming exercise has been completely transparent to our staff, our 5,000 distribution partners, and our customers. We are so proud of this phenomenal success.”

Although a transparent move was the objective, behind the scenes the benefits are clearly apparent. At a corporate level, moving from the Fortis-hosted mainframe gave AG full autonomy over its own IT strategy. This might have also been achieved by moving to a new mainframe hosting partner, but that would still have left the team with the integration limitations and the siloed development approach dictated by the mainframe environment. Van Belle is pleased to note:

“Moving our mainframe workload to Windows, supported by the Micro Focus Enterprise solutions, gives us an annual operational cost savings of over 75 percent, compared with the ongoing and rising cost of the mainframe. We expect to achieve full ROI on our investment within 4–5 years.”

Though cost savings are always welcome, they were not the sole motivation for this move which inherently involved a great deal of risk and complexity. Because the new environment is open to APIs – the protocol that allows applications to share and exchange data – operational and data analytics systems are now very close to each other, forming the foundation for the data-driven company AG strives to be. Van Belle notes as key benefits: “Having the connection between our transaction-led, batch-processing operational systems, and modern, often cloud-based data analytics solutions is invaluable to us.”

“Micro Focus enabled us to build and unify a new data-driven backbone for our company. With this backbone we can leverage new technologies, such as containerization and APIs to open ourselves safely to our distribution partners’ systems while continuing our technological evolution.”

“We can directly integrate our COBOL solutions with cloud-based features. For instance, if we want to do a Google search directly from a COBOL application, this is now easily done. Just one example of how our COBOL applications continue to give us a competitive edge through modernization. Data is power and its significance increases continually. We will use data to customize our offerings, focus on our customers’ needs, and stay competitive and relevant in our market space.”

Breaking Down Siloes in a Collaborative, Modern Development Environment

One of the most significant changes following the successful replatforming has been the culture change within AG. The project reinforced the collaboration between the infrastructure and development teams. This successful new alliance can now be capitalized upon in a modern, collaborative end-to-end development environment, eliminating all previous siloes. Fortemps comments on the change he saw happening during the project: “When so many people are involved, and the change is so huge, it is inevitable that not everyone is fully onboard from the start. It was great to see how our efforts to articulate the benefits, involve everyone, and respect everyone’s input and opinion, resulted in successfully converting any doubters to full supporters of the replatforming project.”

The team has seen a huge uplift in development skills and knowledge which unlocks development and operations efficiency gains, resulting in a faster time to market. The new environment is considered a differentiator in development talent retention and recruitment too, as the technology is cutting-edge and attracts a new generation of developers.

“This is the largest IT project in our history. As we say a fond farewell to the mainframe that has served us for many decades, we also say an enthusiastic hello to our new, innovative, secure, and open platform, enabling us to meet our customers’ expectations in a market that is constantly evolving. One of our corporate values is “Dare” and with this project we feel this sentiment was shared and embodied at all levels of the organization. We could not have completed this project successfully without Micro Focus supporting us throughout and ensuring that we can look forward to future digital transformations with even greater ambition.”