COBOL stands for Common Business Oriented Language. It is imperative, procedural, and object-oriented. A compiler is a computer program that takes other computer programs written in a high-level (source) language and coverts them into another program, machine code, which the computer can understand. COBOL takes data from a file or database, processes, and outputs it. In short: COBOL takes data in, computes it, and outputs it afterwards.

In the context for this guide, we assume compilers are translating from a high-level programming language, such as COBOL, to create an executable program for use on mainframe-hosted application, perhaps to run large-scale batch or transaction processing jobs. This Micro Focus Supportline tutorial explains how to compile a COBOL program for the mainframe.

Micro Focus today shared the commissioned results of a global, independent market survey, showcasing an unprecedented amount of COBOL code in use, and a remarkable market opportunity for application modernization. According to the global survey, COBOL is viewed as strategic by 92 percent of respondents, and the amount of COBOL code in daily use increased significantly and three times larger than previously estimated at 775-850 billion lines of code. (Previously reported market estimates, often a couple of decades old, have been in the 200-300 billion range)

“As organizations look to deliver on IT strategies through modernization and digital transformation initiatives, the findings of the latest COBOL Survey demonstrate the continued importance of COBOL for application modernization and business change,” said Ed Airey, Director of COBOL Product Marketing, Micro Focus. “800 billion lines of code reinforces the importance, and continued investment, in this most trusted of core business system technologies. This significant volume of COBOL application code in the marketplace represents remarkable value for organizations and requires ongoing investment as part of a larger modernization strategy. For IT leaders, supporting core business systems, COBOL application modernization lies at the heart of digital transformation.”

Key findings of the Micro Focus COBOL Surveys include:

You can learn more about in the survey press release, or watch our recorded webinar to learn more details about the survey results and How much COBOL is really out there?

How old is COBOL?

COBOL is now 63 years old, and was officially given its name on September 18th, 1959. COBOL is the result of US Department of Defense work in the late 1950s to develop a common business language suitable for different kinds of mainframes. The initiative, called CODASYL (or the Committee on Data Systems Languages), drew on Grace Hopper’s FLOW-MATIC, Univac’s AIMACO, and IBM’s COMTRAN. It has been the dominant language for building business systems ever since.

One source lists more than 29,010 companies as still using COBOL, about 0.8% market share. Another estimates that 200 billion lines of COBOL code are still active, and that 90% of Fortune 500 companies, most notably big finance, insurance companies, airlines and retail point-of-sale systems rely on COBOL.

A 2017 Reuters study lists 43% of banking systems still use COBOL, while COBOL applications still power more than 65% of enterprise software and 70% of business transaction processing, including 95% of ATM swipes. One live government system is 60 years old.

COBOL is a domain-specific, or specialist, language. In this case, the specialism is business programming. It is this specificity, portability, and the relatable syntax that has helped keep the COBOL story going.

Why do enterprises still use COBOL?

COBOL persists for many equally valid reasons. One is that nothing is as flexible or reliable as COBOL. Banks, for example, need complete accuracy. COBOL outperforms Java in that respect. Another is that many of biggest enterprises in the world use core applications written in COBOL, and intervention is too risky, or expensive. COBOL’s enduring usefulness in a constantly changing digital world provide the combination of continued innovation and reliability which are IT necessities.

In 2008, the Commonwealth Bank of Australia announced a $580 million AU plan to replace its core banking platform. The job took more than five years, cost more than $1 billion AU ($749.million US). The third reason is that integrated development environments (IDEs) the software development tools where developers write, build, test, and debug mainframe programs. These solutions, such as Visual COBOL, can modernize COBOL applications to support future innovation, making replacement unnecessary.

Micro Focus, IBM, Fujitsu and GnuCOBOL are the leading vendors of COBOL compilers. While a lack of skilled COBOL programmers is widely touted as an issue, there are solutions, including Visual COBOL Personal Edition (PE).

This portability, the means to move core applications and systems from where they are to the platforms that will best support future innovation, that form a key plank of many digital transformation strategies.

Other mainframe modernization plays will be different. Mainframe to cloud is just one option; physical to virtual is another. Others may want to embrace open source by taking their UNIX operating system to Linux. The key is to look where the market is going; new platforms such as Docker, automation through Kubernetes; maybe .NET, JVM, Windows, zLinux, AWS, Azure, or GCP is where you want to be.

The point is COBOL, enabled by Micro Focus tools, is not an anchor holding you back, it is the launchpad for future innovation.

These tools bridge the gap between established technologies that have served the enterprise well, and innovation to support the business going forward. Using Visual COBOL, enterprises can harness the flexibility of the cloud, and improve responsiveness to future demand, while enabling efficient infrastructure management.

How does COBOL link to the mainframe?

Time, and many different iterations of both the language and the hardware, have irrevocably linked COBOL and the mainframe. No matter how both have evolved, COBOL remains the mainstay language of the mainframe. Neither show any sign of declining popularity among those who depend on them most.

Many use Micro Focus Visual COBOL to develop COBOL applications within the Microsoft Visual Studio and Eclipse IDEs. Using the same solution, developers can create COBOL applications that run as .NET-managed code in the .NET environment, and develop and compile applications to native COBOL code, as .exe or .dll before deploying and further debugging the application under COBOL Server, a companion to Visual COBOL. Eclipse plug-ins open the door to other languages, such as Ada, ABAP, C, C++, C#, JavaScript and Ruby.

This IBM tutorial can help write a COBOL program for the z/OS, while this links to a sample Micro Focus COBOL program. These step-through guides explain how to write mainframe programs for Windows and Linux. 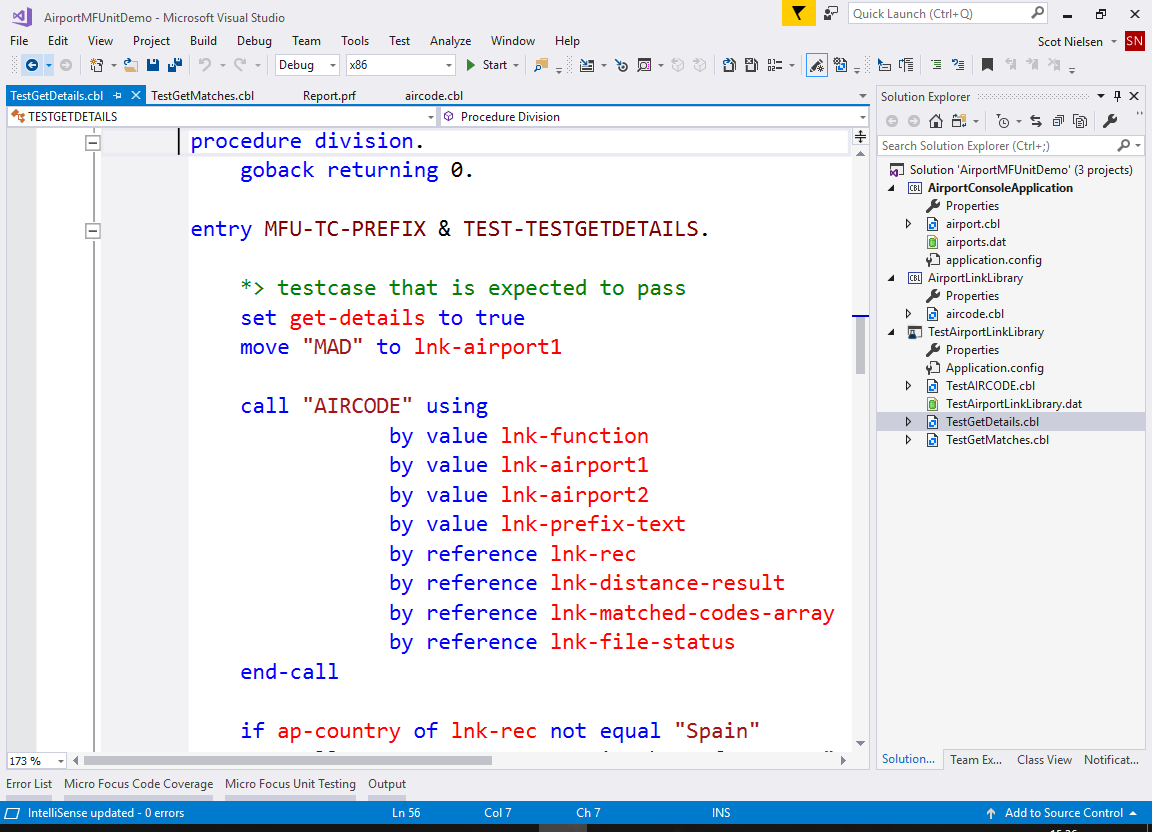 Is there a career in COBOL?

In short, yes. This blogger makes a great case for learning COBOL, and this infographic highlights the fact that there are more active lines of COBOL in use than any other language.

Certainly, the potential for a career in COBOL is real. In a survey of 357 IT professionals, 46 percent of respondents were noticing a COBOL programmer shortage, while 50 percent said the average age of their COBOL staff is 45 or older, and 22% said the age is 55 or older. Certainly, about 50% of the many thousands of members on our COBOL programmers page on Facebook are 25-34 years old, our biggest demographic group, with the vast majority between 25-44 years old. There is room for more, and we discuss the pathway to a career in COBOL here.

Micro Focus are unique in preferring to enable future generations of programmers to work in COBOL, rather than wondering how the world will cope with a shortfall. That is why we offer Visual COBOL personal edition, free, for those learning the language, and work with universities to deliver the COBOL Academic Program to further this skillset in the classroom. Our academic program enables tomorrows COBOL Developer talent for those looking to:

While COBOL programs continue to support big business, and the IT group at the Bank of New York Mellon still run 112,500 different COBOL programs, using 343 million lines of code, then the work is there.

The longer answer is that it makes sense to learn it as well as other languages. The readability of COBOL makes it accessible to people beyond those who work in programming for a living.

IBM, the world’s biggest mainframe vendor, offers fellowships and training programs in COBOL for young IT specialists, and has trained more than 180,000 developers in 12 years. Meanwhile, new platforms such as The Open Mainframe Project are launching and can be another source of inspiration. There is a wealth of material out there. See the links below.

Micro Focus commissioned a global, independent market survey by Vanson Bourne, showcasing an unprecedented amount of COBOL code still in use strategic importance in 92% of the respondent’s organizations, and a remarkable market opportunity for application modernization. Download this free ebook to learn key points in the survey results.

Our Solutions for COBOL